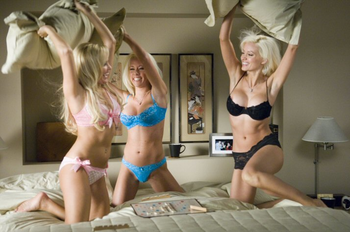 Monica: When women hang out, we don't have pillow fights in our underwear.
[Chandler doubles over in shock]
Monica: I'm sorry, we do. We do! I don't know why I said that.
— Friends
Advertisement:

A gathering of characters (typically female) engage in a not-particularly serious battle or physical challenge for purposes of titillation. Unlike a Cat Fight, this is not an actual violent encounter — it may be a pillow fight (such as at a Slumber Party), a volleyball contest or Mud Wrestling. Expect the wardrobe to be skimpy and the action to be bouncy.

Often an instance of Eating the Eye Candy by any observers of the appropriate gender and Male or Female Gaze depending on target demographic. Contrast Designated Girl Fight, which may sometimes overlap but is generally played straight even if it is done primarily for Fanservice.

While they're in the school pool after hours, Max and Chloe play-fight by splashing one another with water.

While they're in the school pool after hours, Max and Chloe play-fight by splashing one another with water.