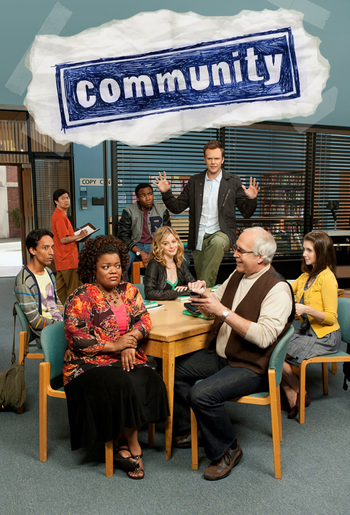 ♫ I can't count the reasons I should stay
One by one, they all just fade away ♫note From left to right: Abed Nadir, Ben Chang, Shirley Bennett, Troy Barnes (back), Britta Perry (front), Jeff Winger, Pierce Hawthorne, and Annie Edison. Not pictured: Dean Craig Pelton, Professor Ian Duncan, Professor Buzz Hickey, Frankie Dart, Elroy Patashnik, the concept of sanity, and many, many more.
"You've just stopped being a study group. You've become something unstoppable. I hereby pronounce you a community."
— Jeff Winger, "Pilot"
Advertisement:

Community is an Ensemble Cast Sitcom created by Dan Harmon. It first aired on NBC from 2009-2014, then was promptly Uncancelled and had its sixth and final season streamed on Yahoo! Screen in 2015.

Joel McHale stars as Jeff Winger, an Amoral Attorney who got caught playing fast and loose with the truth... this time in regards to his college degree. In an attempt to get a legitimate(-ish) degree without doing any work, he's enrolled in the local community college. He quickly attempts to get in good with Britta (Gillian Jacobs), an outspoken ex-anarchist from his Spanish 101 class, by pretending to be a "board-certified Spanish tutor" who can help her study.

Each season shows the study group developing through an underlying theme, with the first four seasons tying that theme into a class the group took together. The first season had Spanish, alluding to the study group members learning to communicate with each other; the second season featured Anthropology, which highlighted the group growing into a tight-knit "tribe"; the third season centered around Biology, feeding into the group struggling with their capacity to evolve; and the fourth season incorporated History, with the group coming to terms with their pasts but also realizing how much they've grown. The fifth season revolves around the characters returning to the school after some time, having failed to make much of their lives outside the school, and deciding to form the "Save Greendale" committee in order to both improve the school overall and to find meaning in their lives. The sixth season had a theme of moving on through acceptance both of where you are and of change alongside the realization that it's okay for things to end.

The show's humor is driven by the character interaction, supplemented by rampant lampshade hangings. As a side effect of this, the trope examples will be very quote-driven. Episodes often directly riff on different media genres, taking great artistic liberties and changing the style of the show to match what they're parodying. This means that episode-to-episode, Community can become a wildly different show; one week it's a sendup to American mobster films

like Goodfellas, in another its a space disaster film

, and in yet another its a documentary-style parody of

Dan Harmon — whose work ethic and perfectionism had made for constant battles with the network, the production studio, and star Chevy Chase (who infamously left a hate-filled tirade on his voicemail) — ultimately got fired off his own show at the end of the third season, replaced by producers Moses Port and David Guarascio (known for Just Shoot Me! and Happy Endings). After the fourth season, the show was renewed and Harmon hired back as showrunner for season five. Chase left at the end of season four, leaving the show bringing in Jonathan Banks guest-starring as an unofficial replacement, and Donald Glover departed after five episodes for personal reasons

. NBC officially canceled the show after season five, but it was picked up by Yahoo Screen! for a sixth season. Yvette Nicole Brown left to focus on taking care of her ailing father (ultimately guest-starring in the season's premiere and finale), and Keith David and Paget Brewster were added to the cast for the sixth season as new main characters, but only billed as supporting players in the show's credits.

For the longest time, fans held out hope for "six seasons and a movie," as their collective mantra went. In spite of the low television ratings, notoriously Troubled Production, firing-then-rehiring of its creator, departure of three cast members and raising the profile of several actors/resurrecting careers, the show got to end on its own terms after all on June 2, 2015, though conversations about a potential film have occasionally popped up since. In September 2022, the film was finally announced

for Peacock, with McHale, Jacobs, Pudi, Brie, Rash, and Jeong confirmed so far to reprise their roles. McHale will also serve as an executive producer along with Harmon, who will co-write the screenplay with fellow Community scribe, Andrew Guest.

The writers of the show are aware of this very wiki (Harmon has been quoted on Twitter as having used to be on this site "religiously"), and often use it for research

The show also has its own Community Tumblr

Note: Due to the Troperiffic nature of the show, tropes relating to the series in general go here. Please put tropes that apply to individual episodes or individual characters in the series on their respective pages.

open/close all folders
A-E
Troy: It said market price. What market are you shopping at?
F-K
L-P
Q-S
T-Z
Troy and Abed in The Stinger!
Feedback