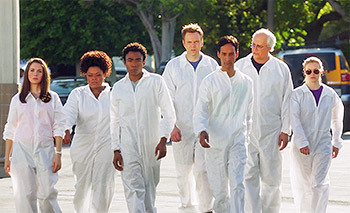 "We are 40 light years outside of the Buttermilk Nebula, although it's possible that ...(Beat)... yeah, it's a sticker."
— Troy
Advertisement:

City College and Greendale are locked in a race to be the first local college to claim a simulated mission to space. The study group is tasked with cleaning out the simulator after their latest prank is found out by the Dean. Before they can even begin cleaning, they are locked inside the simulator, sans Abed, and towed away. Now it's a race against the clock to guide the simulator back to the campus and beat City College.

Has a YMMV page and a Trivia page.