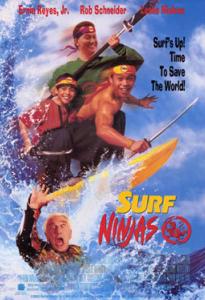 Surf Ninjas is a family film directed by Neal Israel from a screenplay by Israel and Dan Gordon. It was released on August 20, 1993.

Johnny (Ernie Reyes Jr) and Adam (Nicolas Cowan) were perfectly ordinary brothers, surfing afternoons and weekends while attending school during the day. Then comes a mysterious stranger named Zatch (Ernie Reyes Sr) with an Eyepatch of Power and news of an unbelievable heritage. Adventure ensues as the brothers journey to obtain their birthright from the villainous Colonel Chi (Leslie Nielsen).