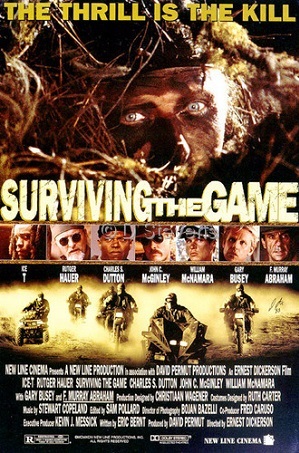 Surviving the Game is a 1994 action film starring Ice-T, Rutger Hauer, F. Murray Abraham, and Gary Busey, loosely based on the short story "The Most Dangerous Game" by Richard Connell.

Jack Mason (Ice T) is a homeless man who thinks his life can't get any worse. Aside from having no home and not a dollar to his name, he loses his two best friends in the same day, and decides to commit suicide. A soup kitchen worker, Walter Cole (Charles S. Dutton), saves him from his suicide attempt and directs him to a business man named Thomas Burns (Hauer), who offers him a job as a hunting guide. Mason has his doubts, but hey, well-paying job, right?

Shortly after getting to the remote site in the Pacific Northwest, Mason discovers that the rest of the hunting party (who paid handsomely to be there) has one specific prey in mind to hunt, said to be the most challenging of all prey animals: Man.

And guess who their lucky quarry is?