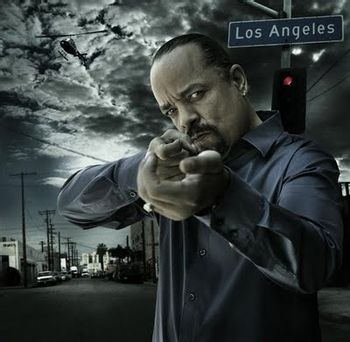 Original Gangsta
"I've been dogged out by cops, shackled and socked. Paid my dues to the streets, took my hard knocks."
— Ice-T, "Squeeze The Trigger"
Advertisement:

Tracy Lauren Marrow (born February 16, 1958 in Newark, New Jersey), better known by his stage name Ice-T, is a Grammy Award and NAACP Image Award-winning American rapper, actor and author. He is credited with helping in pioneering gangsta rap in the late 1980s. As an actor, he is best known for his portrayal of NYPD Detective Odafin "Fin" Tutuola on the NBC police drama Law & Order: Special Victims Unit. Although one of West Coast hip hop's leading figures, Marrow was actually born in urban Newark, New Jersey, and christened Tracy by his father. When he was a child, he moved from his native Newark to the upscale community of Summit, New Jersey. His mother died of a heart attack when he was in third grade and his father died of a heart attack four years later.

After his father died, he went to live with his paternal aunt in California and later attended Crenshaw High School in South Central Los Angeles; his time there included the beginnings of the Crip/Blood gang wars, and it was there that he became obsessed with rap. After high school, he entered the United States Army and served for four years as a ranger in the Schofield Barracks 25th Infantry, home of the legendary "Tropic Lightning" unit. Ice has stated that while for the first half of his tour, he took pride in being the best he could at whatever he was assigned to, by the end of his four years he was simply wanting to get back to civilian life.

Upon returning to his old neigborhood, Ice found that the gang violence between Crips and Bloods had escalated, and many of his old high school friends were now either professional thieves or in jail. After several months of being kept on the outside, Ice was brought into the group, and he quickly found that his military career had inadvertently given him the tools to plan efficient, effective and non-violent crimes. His 'crew' subsequently went on a crime spree (mostly jewelry store robberies) that ran up and down the west coast, and in some cases even the Midwest. Ice also experimented with being a pimp, and dabbled in pushing cocaine before deciding he didn't have the temperament to be a drug dealer.

After staying out all night clubbing, Ice was returning to his home when he fell asleep at the wheel and his car rolled into an intersection, where he was broadsided. Recuperating from his life-threatening injuries (a broken pelvis, left shoulder, arm, and both upper and lower legs) took months, and a further long period of physical rehabilitation rendered him unable to do much more than walk. While recovering, Ice decided that his life of crime had run its course, and began to focus on his DJing and rapping full-time.

After recording several "party" style records, Ice cut the track that made him famous: "6 In The Mornin'", and along with a cameo in Breakin', landed a deal with major label Sire Records. When label founder and president Seymour Stein heard his demo, he said, "He sounds like Bob Dylan." Shortly after, he released his debut album Rhyme Pays in 1987 supported by DJ Evil E, DJ Aladdin and producer Afrika Islam, who helped create the mainly party-oriented sound. The record wound up being certified gold by the RIAA. That same year, he recorded the title theme song for Dennis Hopper's Colors, a film about inner-city life in Los Angeles. His next album Power was released in 1988, under his own label Rhyme Syndicate, and it was a more assured and impressive record, earning him strong reviews and his second gold record. Released in 1989, The Iceberg/Freedom of Speech... Just Watch What You Say established his popularity by matching excellent abrasive music with narrative and commentative lyrics.

In 1991 he released his album O.G. Original Gangster, which is regarded as one of the albums that defined gangsta rap. On OG, he introduced his Hardcore Punk/Thrash Metal band Body Count in a track of the same name. Ice-T toured with Body Count on the first annual Lollapalooza concert tour in 1991, gaining him appeal among middle-class teenagers and fans of alternative music genres. The self-titled debut album by Body Count followed.

In 2002, he married supermodel Coco Austin, and the two had a child named Chanel in November 2015.

In 2012, Ice-T made a documentary called Something from Nothing: The Art of Rap

, a loose look at rap and hip-hop's history and influence.

Not to be confused with Ice Cube, a fellow rapper from Los Angeles. See here