I'm the cream of the crop, I rise to the top, I never eat a pig cause a pig is a cop 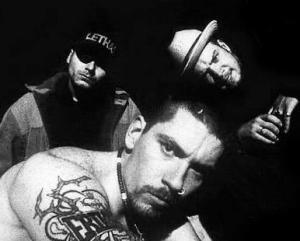 Ya see, I'm Irish, but I'm not a Leprechaun/You wanna fight, then step up and we'll get it on/You gotta right to the grill, I'm white and I'm ill/A descendant of Dublin with titanic skills
Related Acts:
Advertisement:

Consisting of two Irish-American M.C.'s, Everlast and Danny Boy, and a Latvian-born DJ, Lethal, House of Pain is best known for their 1992 hit, "Jump Around", which has given them a One-Hit Wonder in the United Statesnote unless you're in an area with a large Irish-American population, although they've had other hits overseas.

Everlast started off his career solo as the Token White member of Ice-T's Rhyme Syndicate, releasing a solo album, Forever Everlasting in 1990. House of Pain formed in 1991, and released a Self-Titled Album which earned a lot of respectable press and sales, and a megahit single, "Jump Around", partly due to their association with Cypress Hill, whose DJ, Muggs, provided some of the album's production. They also participated in a Rap Rock fusion with the metal band Helmet for the Judgement Night soundtrack in 1993. A second LP, Same as It Ever Was, was even better received by critics, but not in sales.

Concurrent with the bombing of their third album, Truth Crushed to Earth Shall Rise Again, the band split up and Everlast pursued a solo career, utilizing a different sound reflecting a mix of some of his favorite genres, including rock, blues and country. DJ Lethal also joined the Nu Metal band Limp Bizkit, and for a while, it seemed that House of Pain was dead, until all HOP members formed the new group La Coka Nostra, with Ill Bill and Slaine, in 2006. House of Pain officially reformed in 2010, and will release a new album, while La Coka Nostra is also still kicking with Danny Boy, Ill Bill, Slaine, and DJ Eclipse.

"Jump Around" is a popular favorite, often played at sporting events in the United States, covered by

Limp Bizkit in concerts, and translated into Gaeilge by Irish comedian Des Bishop

. "Top O' The Morning to Ya" is another favorite from the group, featured in the movies Daredevil and Heat.