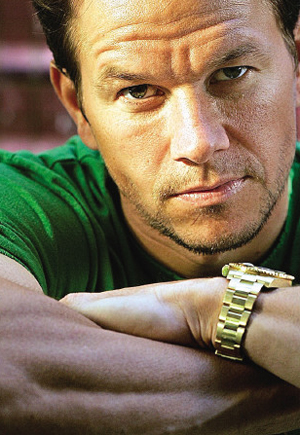 Wayne: Yeah, I thought Mark Wahlberg was super-sexy in this, especially with his shirt off.
Garth: What?
Wayne: I'm sorry, that was an inside thought.
— Wayne's World
Advertisement:

Hey tropers, how's it goin? I see you're on the Mark Wahlberg page, that's really great. So you guys are tropers huh, what's that all about? OK, well it was good to meet you. Say hi to your mother for me, OK?

Mark Robert Michael Wahlberg (born June 5, 1971 in Boston, Massachusetts) is an American actor and former musician. After a troubled youth that saw numerous brushes with Johnny Law (along with committing numerous hate crimes against both Black and Asian people), Wahlberg's older brother Donnie (of the New Kids on the Block) arranged an entry-point into the music business (though personal agreements made him decide against permanently joining the New Kids). Now styling himself as Marky Mark (accompanied by the Funky Bunch), Wahlberg became a rap star. Their most successful single was "Good Vibrations" (not to be confused with The Beach Boys song). This period in his career is often regarded as being rather Narmy, even by fans and Wahlberg himself. By the mid-1990s, he began to make the transition into acting, and became an even bigger success than before, both commercially and, with his role in Boogie Nights, critically. He even earned an Oscar nomination for Best Supporting Actor for his role in The Departed.

He has also served as the executive producer of Entourage which is loosely based on his experiences as an up-and-coming actor. He was also an executive producer of Boardwalk Empire, and he appears in the A&E series Wahlburgers, which focuses on his brother Paul's efforts to expand his restaurant business in Boston.

Not to be confused with Mark L. Walberg.

The films of Mark Wahlberg include: