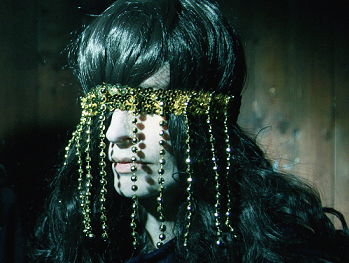 "What is soft dick rock?"
Advertisement:

Jenny Hval, born 11 July 1980, is a singer, songwriter, producer, multi-instrumentalist and poet from Norway. Her music usually contains feminist themes, but it is also very... explicit about it, to say the least. She is also known for her highly eccentric and artistic live performances.

Jenny was born in the small city of Tvedestrand, and started making music under the name of Rockettothesky in 2006, releasing two albums under this moniker. These two records became minor hits in her home country. Viscera, her first album under her birth name, was released in 2011. She also released Innocence Is Kinky in 2013 and Meshes of Voice, a collaboration with fellow Norwegian artist Susanna, the following year.

Her first album under the well-known indie label Sacred Bones came in 2015 with the release of Apocalypse, girl, which received a lot of critical acclaim. However, without a doubt, her most successful release is 2016's highly conceptual Blood Bitch, influenced by vampires, menstruation and obscure, gory horror films from the 1970s.