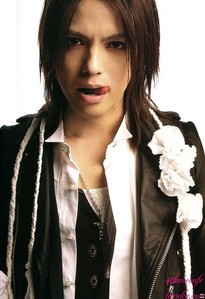 Are you ready?
Advertisement:

HYDE, born Hideto Takarai in Wakayama, Japan, started out in music as the vocalist of L'arc-en-Ciel. He debuted as a solo artist in 2000. Notably, his solo image is both Darker and Edgier and more Visual Kei-oriented than his image in his work with L'Arc: while some of his early solo work is quiet, soft ballads (and occasionally one will still pop up now and then) most of his solo work tends toward being Hard Rock with some occasional Heavy Metal, and the Protest Song and Religion Rant Song of all types are familiar territory. His solo work can be best compared to a Japanese Marilyn Manson and also draws heavy inspiration from the darker periods of Atsushi Sakurai of BUCK-TICK. After several solo albums, he joined up with KAZ Iwaike (ex. hide solo, Oblivion Dust) and occasionally Ju-Ken (ex. Gackt) and formed Vamps.

Hyde and his solo works provide examples of the following tropes: