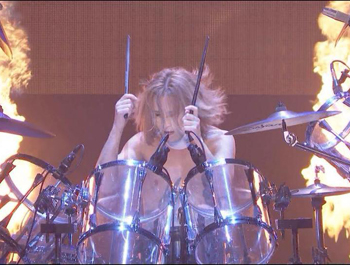 "The Work Which Becomes a New Genre Itself..."
Related acts with which Yoshiki Hayashi has performed:
Acts once signed to Extasy Records by Yoshiki as a solo producer (NOTE: as it no longer is signing artists, none of these are signed to it as of this time):
Yoshiki Hayashi (who usually goes by his first name, Yoshiki, which is capitalized as YOSHIKI in his solo or band work) is the bandleader, drummer, pianist, occasional guitarist, and co-creator of the rock band
Advertisement:
X Japan. While a true statement, it's also an understatement - he has also been everything from a product designer and male model to an American music producer known for his work on Saw IV, Catacombs, and Repo! The Genetic Opera. He is also the founder of the first dedicated Visual Kei label, Extasy Records, and has been as such the Record Producer for a lot of Visual Kei bands other than his own, including Dir en grey and Glay.

Other projects he has been attached to or involved in in some way include Globe, V2, and classical solo performances, including one for the emperor of Japan (the Anniversary Concert). As of 2002 until the reunion of X Japan, he has been doing most work toward his solo project, Violet UK. (Yoshiki is the only current permanent member of Violet UK.) He has also produced work with Roger Taylor and George Martin among others. As of 2012, he has become the composer of note for the 69th and 70th Annual Golden Globes. He has also released two classical albums (Yoshiki Selection 1 and 2) with a third (Yoshiki Classical) released on US Itunes on August 27, 2013, with an international and physical CD release delayed but completed in October and November due to a controversy with cover art.

Yoshiki is also a video blogger and an executive advisor with Ustream. He posts regularly on Twitter at @YoshikiOfficial, and does most interaction with other artists and celebrities and even fans there, and on Facebook. Though he's also on Tumblr, Instagram, LINE, and Google+. He has also opened a Weibo account for Chinese fans of X Japan, and seems very interested in encouraging peace between Japan and China, having performed multiple times in China and refusing to take a public stance on any contentious political issues.

NOT related to Yo-Yo Plot Point, though if his film auteur aspirations ever became successful, who knows?

Yoshiki's charitable and awareness efforts have become more widely known over 2011: not only has he worked, through the Yoshiki Foundation, to raise funds and help with the Great East Japan Earthquake relief effort, he also has donated money, band memorabilia, and more for the Thailand floods relief effort, and seems to be very concerned for disaster victims especially in the countries which he has visited or to which X Japan has been on tour.

As of 2013, he began a new solo project of playing "classical" instrumental music, primarily rearranges/remixes of his X Japan and Violet UK music written for classical as opposed to covering classical pieces by historically famous composers, having released one album (the aforementioned Yoshiki Classical/Yoshiki Melodies Classics) and performed at the Grammy Museum twice - once in August 2013 and another time - to celebrate the museum exhibit devoted to him and announce many of the dates of his planned 2014 solo classical tour - in February 2014. He then performed twice at SXSW in Austin, Texas in March 2014, creating a viral video of himself playing Art of Life against a Projected Man - himself.

He completed a successful solo classical world tour, with concerts in California, Mexico, Russia, Germany, France, the United Kingdom, China, Thailand, Taiwan, and Japan, and has written yet another song for Violet UK, Hero, which is the theme for the anime film Saint Seiya: Legend of Sanctuary. His band X Japan has performed two sold-out shows in Yokohama Arena September 30th and October 1, 2014, as well as a US show at Madison Square Garden in New York City.

(His name is, despite every time you may have heard it (mis)pronounced in mainstream media, properly pronounced closer to "Yosh'key" or "Yosh'ki." (those aren't even the exact pronunciations in Japanese, but for English speakers, they are the closest you can get to correct.) It is never, ever pronounced "Yosheekee," even if he often lets it go or even does it himself. "Yokashi" is only forgiven for Stan Lee, and "Yoshi" will make most people wonder why you're talking about the green dinosaur from Super Mario Bros..