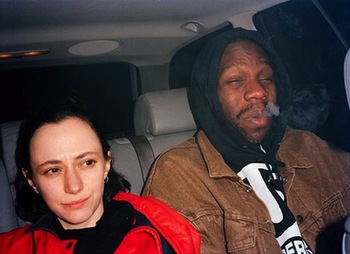 "Think of it as sorta like in 2007, when teenagers used to run around telling each other they "only listened to 90s R&B" for weird kudos points. [...] Ergo, Hype Williams is their collective attempt to relive 1998 via 2007. Weird, or what?"
Advertisement:

Hype Williams were a Synth-Pop and experimental band most notably fronted by Dean Blunt and Inga Copeland. Their music is described as "hypnagogic pop", meaning it is pop concerned with the ideas of "cultural memory and nostalgia"

Dean Blunt says Hype Williams was a project passed down to them by the artist Denna Frances Glass, and they released the album Untitled in 2010. In 2010, they also released the album Find Out What Happens When People Stop Being Polite, And Start Gettin Reel. In 2011, they released their album One Nation. In 2012, they released two albums under their 'real' names: The Attitude Era, a collection of unreleased tracks for The Guardian, and Black is Beautiful. In 2013, they posted this message on their Facebook page:

However, in 2015, more tracks were released under the Hype Williams name, such as "Distance". In 2016, the album 10 / 10 was released, the new owner of the identity of Hype Williams unknown.

Not to be confused with the music video director

Tropes that apply to Hype Williams: