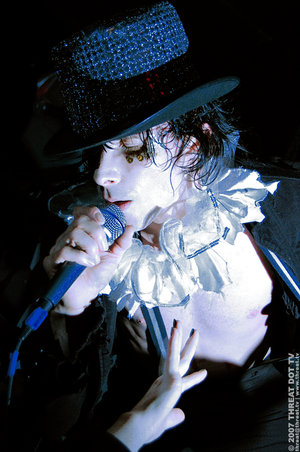 Face of the Band, Chris Corner
"Think you're giving but you're taking my life away..."

IAMX is a British indie, alternative and electronic act consisting of Chris Corner, the band and occasionally his ex-partner, Sue Denim, of Robots In Disguise fame. IAMX began after Sneaker Pimps' fourth album was shelved and Chris decided to work on his own music instead of focusing on fixing the album. 2004 saw the release of IAMX's debut album, Kiss + Swallow, which, with the help of Sue, dealt with topics such as sex, destructive relationships, sex, lies, sex , the destructive and ultimately collapsing nature of modern society, and for good measure, sex. Kiss + Swallow was followed in 2006 by The Alternative, a Darker and Edgier album that delved into surrealist imagery, political dissertations, mental instability, and unstable relationships. After The Alternative came Kingdom of Welcome Addiction, wherein Chris discusses modern society, incest, the doomed nature of the modern world, alcoholism and other fun topics. The album also had the help of "My Secret Friend", a collaborative effort between Chris and Imogen Heap. While the song itself was amazing, the video, which featured some rather attractive feats of cross dressing, was acclaimed by nearly all who saw it, and was promptly ignored by everyone else. IAMX's next album, Volatile Times, dealt with many of themes previously mentioned (mainly political instability and dysfunctional relationships) and added new topics like probable insanity, atheism and bigotry to the mix.

Part of the sheer appeal of IAMX comes from the amazing diversity of the music involved in the songs, especially when combined with Chris' voice. His refusal to pull punches in his lyrics, sheer conviction, and the constant exploration of topics that many bands won't touch are all part of the amazing fucked-up-ness that is IAMX.

IAMX have been slowly growing in popularity, thanks to both the geographically-wide touring and large number of collaborative efforts. While their popularity lies mainly in Germany, they are loved worldwide and will undoubtedly remain so for a long time.

Tropes associated with IAMX include: