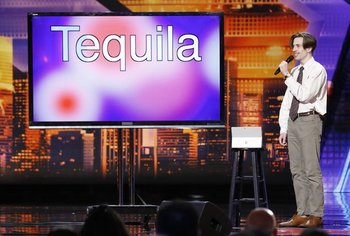 Getting a perfect score in karaoke is as simple as nailing this line.
"Tequila!"
— The Champs, "Tequila"
Advertisement:

These songs have a short list of lyrics. Maybe there's only a few lines in a much longer song. Maybe the vocalist sings the lyrics repeatedly. Often overlaps with Title-Only Chorus. Has been known to overlap with Broken Record. Can result in Chorus-Only Song as these wind up feeling like a Limited Lyrics Song. Especially long songs can fall into this if the lyrics are sufficiently limited. The lyrics don't even need to be bunched up in a small space in the song. Can also result in Refrain from Assuming if the repeated line isn't the title.

To qualify for this trope, the song must be more than 2 minutes long. Exceptionally short songs (under 2 minutes long) rarely qualify since there isn't enough time for a great many lyrics to begin with.