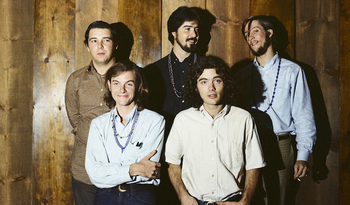 The 13th Floor Elevators were a band from Austin, Texas, who served as one of the Trope Codifiers and the Trope Namer for the genre of Psychedelic Rock back in The '60s.

The band was formed in 1966, centered around guitarist/vocalist Roky Erickson, guitarist Stacy Sutherland and electric jug player Tommy Hall (both of whom performed backing vocals), with a variety of drummers and bassists coming and going for the duration of their short career.

The band were fervently dedicated to the idea of psychedelia and expanding the boundaries of the mind, religiously advocating use of hallucinogenics in their lyrics and sleeve notes, and becoming one of the first bands to release an album with "psychedelic" in the title.note The very first was The Deep, whose Psychedelic Moods came out just before the Elevators' album. According to legend, Hall's jug was tuned by the amount of marijuana stored in it.

They released two albums in close succession, The Psychedelic Sounds of the 13th Floor Elevators and Easter Everywhere. The first one yielded their only successful single and arguable Signature Song, "You're Gonna Miss Me". However, the band disintegrated after they got busted by the Texas authorities for possession of drugs - Stacy went to prison, while Roky misguidedly pleaded insanity and landed in a state hospital for the criminally insane until 1973, and struggled with mental issues for the rest of his life. Stacy was accidentally shot by his wife in 1978, while Tommy became a devout follower of Scientology in the same decade.

They've been really influential on the Psychedelic Rock and Alternative Rock movement.

Erickson maintains a strong cult following and is considered an Austin icon on par with Willie Nelson and Stevie Ray Vaughan despite not coming near either man's level of success. His solo career is highly influential in the Horror Rock genre, and counts members of bands like ZZ Top and R.E.M. as fans. Erickson died on May 31st, 2019.