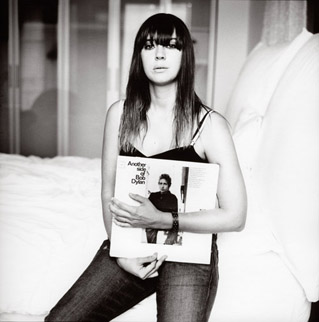 "Once a song is recorded, it's taken for granted that that's what the song sounds like. I feel like that's not true. Once you've played the song a thousand times, your life experiences affect the way you perform the song and the way the song actually grows and lives. The recording should actually come after – it just seems weird that you record the song and then play it afterwards. I don't know how to feel good about recording. It's strange – it's like trapping ghosts. It's like math. Or trapping the meaning of life. That doesn't really feel right."
— Chan Marshall, on recording music
Advertisement:

Charlyn Marie "Chan" ("Shawn") Marshall (born January 21, 1972) is a Southern-bred woman. Her family moved frequently. This constant travelling helped prepare Marshall for the touring life she would have as a musician. Marshall is known for having unpolished live shows, with songs beginning and ending abruptly or blending into one another without clear transitions. She has also cut short performances without explanation.

After dropping out of high school, she started performing with a live band. In 1992 she moved to New York City with one of her live band members, Glen Thrasher. Glen introduced Marshall to the experimental and free jazz scene. She saw an Anthony Braxton concert, which gave her the confidence to perform in public. While opening for Liz Phair in 1994, she met Sonic Youth's drummer Steve Shelley and Tim Foljahn, who played on her first two albums and encouraged her to continue her music career. Marshall took the alias "Cat Power" from a Caterpillar ad that read: "Cat Diesel Power."

In late 1996, after a three-month tour in support of her third album What Would the Community Think, Marshall disappeared from the music scene. She worked as a babysitter in Oregon at first, then moving to a farmhouse in South Carolina with her boyfriend at-the-time. Her plan was to permanently retire from performing live, but during a sleepless night resulting from a nightmare she wrote several new songs. These songs would be the bulk of Moon Pix. After later tours Marshall was tired of her songs. This resulted in shows where she performed musical accompaniment to The Passion of Joan of Arc, which consisted of original songs and covers. Many of these covers would be on her first cover album The Covers Record.

By the start of the 2000s, Marshall's live performances became random and unpredictable. She blamed this on a drinking problem. Marshall cancelled her tour for the 2006 album The Greatest because she had relationship problems. It eventually became good that Marshall didn't tour, because she needed to recover from something she described as a "psychotic break" that was the fault of mental exhaustion and her alcoholism. This left Marshall feeling suicidal. As part of the recovery, Marshall was admitted to the psychiatric ward at Miami's Mount Sinai Medical Center but left after a week, stating "being in there wasn't me." She later likened the experience to "a pit of hell."

In the winter of 2006, Marshall put together a new backing band, the Dirty Delta Blues band. She also declared herself to be sober, which she defined as having "seven drinks in seven months." Now her live performances are much more enthusiastic and professional. Marshall claims that her newfound musical collaborators and sobriety are the reasons why.