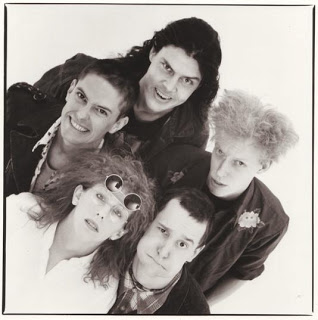 I don't mind the Sun sometimes, the images it shows
I can taste you on my lips and smell you in my clothes
Cinnamon and sugary and softly-spoken lies
You never know just how you look through other people's eyes
—"Pepper"
Advertisement:

Butthole Surfers is a Noise Rock band formed in San Antonio, Texas in 1981, well known for its bizarre and often disturbing lyrics, heavy synthesizing, and macabre live shows. They also use a lot of Black Comedy in their lyrics.

The Surfers began in 1980, when lead singer Gibby Haynes met guitarist Paul Leary while going to college in Texas, where they became friends due to their shared overall weirdness and interest in strange music. They published a magazine, Strange V.D., with a lot of pictures of strange diseases and illnesses, long before they actually started playing in 1981. Throughout The '80s, they built up a cult following in the college rock world through their melding of Punk Rock and Psychedelic Rock, plus a multi-media stage show (including a naked female dancer and grotesque film clips projected on a giant screen) that was an assault on the senses, all capped off with a twisted sense of humor.

Their mainstream commercial breakthrough finally came in The '90s, when big labels were scrambling to sign Alternative Rock acts in the wake of Nirvana's success. After a decade of releasing their music on small indies such as Alternative Tentacles and Touch and Go, the Buttholes signed with Capitol Records; their second Capitol album, Electriclarryland, contained their first big hit "Pepper", which topped the Billboard Modern Rock charts in 1996. Afterwards, they became featured on many movie soundtracks, such as William Shakespeare's Romeo + Juliet and John Carpenter's Escape from L.A..