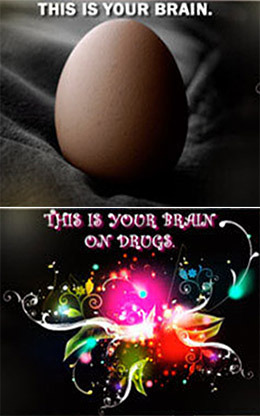 "I take Quaaludes 10 to 15 times a day for my 'back pain', Adderall to stay focused, Xanax to take the edge off, pot to mellow me out, cocaine to wake me back up again, and morphine, well, because it's awesome."
— Jordan Belfort, The Wolf of Wall Street
Advertisement:

Drugs Are Bad, right? They're dangerous. You can get addicted. You could overdose. They have harmful side effects. You could bankrupt yourself, ruin your career, catch diseases from dirty needles. Drugs are bad!

But what if they aren't bad?

As the title indicates, Drugs Are Good is the inverse of Drugs Are Bad. This trope is for instances in fiction and creative works where the use of drugs is portrayed in a positive light. Drugs Are Good is most frequently seen with cigarettes and alcohol, which have always been more or less socially acceptable. It also may accompany depictions of marijuana use, given the common perception of marijuana as a less harmful drug than other illegal drugs. Invocations of Drugs Are Good with harder drugs such as cocaine and heroin are rarer, but not unknown; both drugs used to be legal and used medicinally and recreationally until the 1920s. LSD can sometimes be depicted as such, where it's used as a tool for greater understanding and making things look more colorful.

Many Stoner Flicks are examples of this. Ode to Intoxication is the musical equivalent if it's played straight. Related tropes include Drunken Master (getting drunk/stoned makes you better at something) and Smoking Is Cool (which is about signaling a character is cool but does involve a positive portrayal of smoking).

Compare with Higher Understanding Through Drugs, which isn't so much "drugs are good" (it's often depicted as a creepy or forceful effect) as "drugs are useful".

The Functional Addict may believe this but they really aren't an example. The Smug Straight Edge or the Dry Crusader may pop up in a Drugs Are Good work. This trope may get paired with Drugs Are Bad in a work that shows the "good" side of drugs but then pivots to Drugs Are Bad to show the consequences.

Note that this trope is about the users of drugs, not the sellers. For "drug dealing is good", see Damn, It Feels Good to Be a Gangster! or Better Living Through Evil.