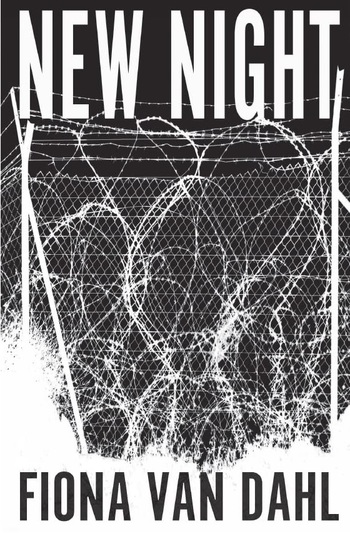 The quarantined city of Gothic is leaking its secrets... and its monsters.
Advertisement:

is a sci-fi thriller written by Fiona van Dahl. It is a (stand-alone) sequel to the scifi horror novel Eden Green; therefore, assume New Night (and this entire page) spoils the ending of Eden Green. The author has also released a free online serial, City on the Edge of Nowhere, to bridge the gap between the books.

Lucas was a police officer in Gothic, Arkansas, on a career path to success. That all ended the day horrifying needle monsters tore through his beloved city, killing hundreds and forcing a federal evacuation. Now Gothic is quarantined behind high, razor-wire-tipped fences, and Lucas works as security at a FEMA refugee camp outside its borders.

But just when things look bleak, a mysterious young woman named Io blows into the camp. Her fate is tied to that of Gothic, and the quarantine's ruthless director will recapture her even if it means plunging the FEMA camp into chaos. Lucas — with the help of his stoner friend Zechariah and a cryptic old computer wizard known as Mr. Condy — must fight tooth-and-nail for the innocents he has sworn to protect.