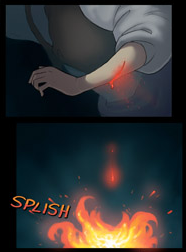 Ann: The normal human body's temperature is about 37 C. But, because Shego is so... unique, I'm not sure what's normal for her. It must take a lot of energy to generate those... flames. I won't be surprised if she does have a higher metabolism than normal so what I'm seeing could be normal, or...
Kim: How much is it?
Ann: 42.
Drakken: Is that bad?
Ann: It could be.
— The Touch of Green Fire
Advertisement:

Let's face it, some characters are pretty damn hot. Other characters may have raging hot passion. But in this trope's case, we find fictional creatures that are literally Hot-Blooded (or anything that's close enough to blood).

This type of being usually has an implication (or at least a possibility) of a temperature difference that's caused by metabolism-based weirdness. This makes some sense, as there are several organisms in Real Life that have an average body temperature that's higher than the human average.

Characters that can play with fire tend to exhibit this trope, along with many fire-related monsters like dragons, salamanders, and fire-related familiars. Lava beasts, fire elementals, and other creatures that actually made of some heat related substance are another trope altogether.

They may be Wreathed in Flames, have Volcanic Veins or have Flaming Hair as well. Contrast Chill of Undeath.