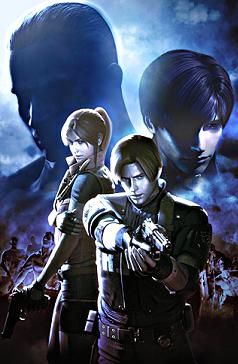 Set in 2002, The Darkside Chronicles covers Leon S. Kennedy's backstory with Jack Krauser (which Resident Evil 4 hinted at) as they search through South American jungles to investigate infamous drug lord Javier Hidalgo, who made contact with an underground Umbrella researcher. The duo discovers that Javier bought a considerable number of B.O.W.s to use as weapons against his enemies — as well as samples of the T-Veronica virus, which he used to unleash a plague of zombies upon the countryside. With the help of a mysterious girl named Manuela, the two men work to discover why a drug lord has begun to dabble in bio-weaponry.

The Darkside Chronicles features three levels subdivided into a number of chapters. "Operation Javier", the main level, covers Leon and Krauser's efforts to battle Javier. "Memory of a Lost City" adapts the events of Resident Evil 2 and frames them as Leon recounting his previous experience with biohazard outbreaks to Krauser. "Game of Oblivion" appears to retell Leon's recollections/near-drowning induced fever dream of the story of the T-Veronica virus, as told to him by Claire Redfield after the events of Code: Veronica. In the game, "Memory of a Lost City" occurs after the first chapter of "Operation Javier", and "Game of Oblivion" occurs in between the second and third chapters of "Operation Javier". Chapters 6 and 7 of "Operation Javier", sometimes referred to as "Darkness Falls" or "Krauser's Hidden Story", retell the events of Chapters 4 and 5 from Krauser's point of view.

The Darkside Chronicles contains examples of the following tropes: