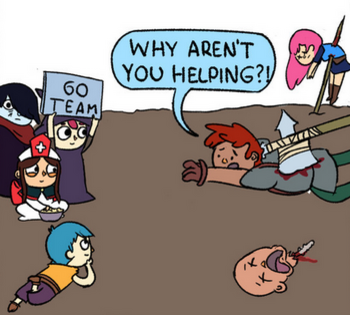 In RPGs with an Arbitrary Headcount Limit, your traveling party may sometimes be too large for the game. However, when you fight with your arbitrarily reduced team size, and then you lose, you still get a game over even though the rest of the characters are still up. Sometimes the characters you do put in your party are Lazy Backup as well; in this case, you lose if the Player Character is killed, even when the rest of the party is still alive and possesses means of resurrection.
Advertisement:

Some games make the backup more lazy than others. In addition to losing the game if the on-screen characters are defeated, there may be arbitrary rules for switching characters:

For those with a need of logic and explanation, however:

A sister trope to Can't Drop the Hero.