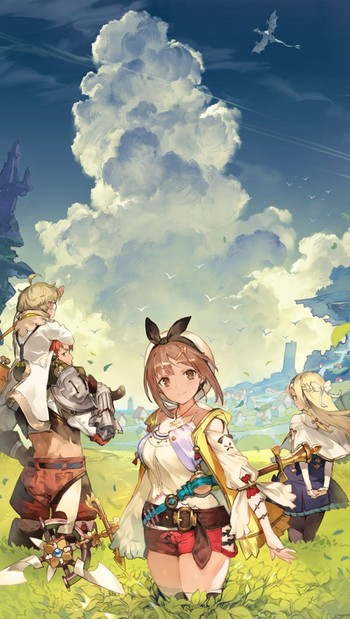 "Farewell, Atelier.
This adventure shall live on in our memories."

Atelier Ryza: Ever Darkness & the Secret Hideout is twenty-first mainline game in the Atelier series, and the first in a new continuity. The game was released on September 26 2019 in Japan for the the PlayStation 4 and Nintendo Switch. A later localized version of the game launched on the same platforms as well as on Steam arrived on October 29 in North America, then Europe on November 1.

Reisalin "Ryza" Stout lives a mundane life on a farm in Rasenboden, her small, boring village on the island of Kurken. Dreaming of excitement, she and her friends head on an adventure during which they meet Empel, an alchemist. Seeing the power of alchemy firsthand, Ryza becomes determined to become an alchemist herself. This marks the start of an adventure that will lead her to save her hometown...

The game introduces new alchemy mechanics: Linkage Synthesis involves adding items to cells, which unlocks linked cells similarly to a Tech Tree to allow the addition of extra items and improved effects, and can even lead to completely new recipes. Rebuild allows you to re-do an item's synthesis in order to upgrade it, at the cost of raising its Dexterity requirement, limiting who can use it. With Gathering Synthesis, you can create gathering points, and share them with other players via passwords. Ryza's secret hideout can also be customized and decorated to your liking.

The battle system is now more action-based, with a semi-real-time Combatant Cooldown System which keeps going as you choose your next move. This time, you control only one character at a time, while your allies act automatically, though you can switch between combatants at any time. MP is gone, now replaced with Actions Points, which are gained by attacking and used to perform special moves and Quick Actions (which ignore the character's cooldown), or to raise the Tactics Level, increasing your power and maximum AP. As for items, they no longer have individual use counts, instead drawing from a shared pool of Core Charges, which can be refilled by sacrificing one item for the duration of the expedition. Fulfilling Action Orders during combat allows characters to perform special follow-up attacks when certain conditions are fulfilled.

A sequel, Atelier Ryza 2: Lost Legends & the Secret Fairy, was released on December 3, 2020 in Japan on the same platforms (plus the PlayStation 5), followed by a release late January 2021 for the global version and the Windows version. Notably, it stars Ryza as the main protagonist again, a first for the franchise, and is set three years after the first game.