Gay Groom in a White Tux 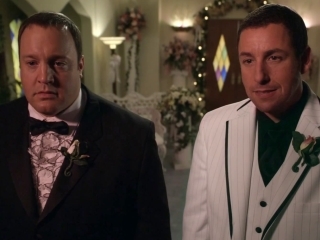 This is a trope about fictional portrayals of gay men's weddings, in which one of them will invariably be wearing a white tuxedo, and the other a black tuxedo. The reason for this trope is that a white tuxedo functions as a man's take on the bride's white dress. Sometimes, a Gender Flip will be seen in which two women marry and one of them, usually a Butch Lesbian, wears a black tuxedo, pantsuit, or skirt suit while the other, often a Lipstick Lesbian, wears a traditional wedding dress.

Something of a Discredited Trope, at least where gay men are concerned. One need only take a look at the wedding blog Men's Vows

to learn that it's far more common for gay male grooms in real life to either wear matching suits or their personal favorite color to their wedding, specifically to avoid implying that one of them is the "bride." Even if one of them is a professional Drag Queen, he'll most likely wear a suit to his wedding since rather than a Fairytale Wedding Dress, it's the actual person getting married and not the stage persona.