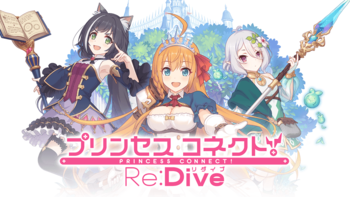 The game's story follows an amnesiac young man who wakes up in the fantasy kingdom of Landsol and embarks on a culinary misadventure across the continent with the Gourmet Food Hall, a guild dedicated to finding the most delicious foods scattered across the land. Along the way, he befriends an increasingly large entourage of beautiful girls, and together, they begin to uncover the secret behind their world held within their lost memories.

It received an animation adaption by Cygames Pictures in April 2020.

It was announced that Re:Dive would be localized by Crunchyroll via their game branch on December 3rd, 2020. A soft launch was released in certain territories for beta testing on December 15, 2020 with the official release on January 19, 2021.

Tropes in the original game and its sequel Re:Dive: