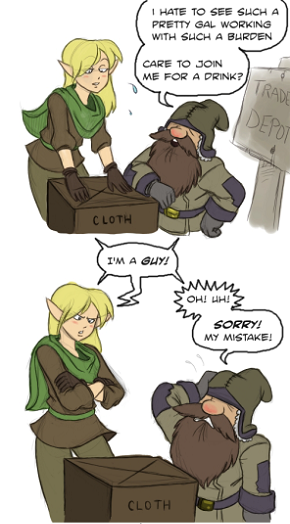 "Hey Urist! Ya can PULL that LEVER now!"

Gabe: It's not gay if it's an elf.
Tycho: I'd love to know why you have a rule for that.
— Penny Arcade
Advertisement:

Male elves are often portrayed as feminine or androgynous, in range from Pretty Boy or Bishounen to Ambiguously Gay. This is often used to cause dumbfounded confusion on reveal.

Occasionally, elves of both genders will be portrayed as androgynous, but usually the male androgyny is part of a broader tendency to portray all elves as particularly feminine, making the female elves anything but androgynous.

The "no facial hair" clause helps, but it's only a little part of the image — other beardless peoples are immune to this even while wearing braids and beads and being among the prototypes for elves. One of the probable reasons why feminine qualities of elves are played up is the intentional contrast between Elves and their traditional opposites, dwarves, who are basically hypermasculine: stout, muscular, hairy, axe-swinging drunks (which depending on the portrayal may apply to female dwarves as well, if they even have them).

Remember that elves and dwarves contrast along several lines: Slobs Versus Snobs, Harmony Versus Discipline, Romanticism Versus Enlightenment, and especially nature versus technology. Thus it makes sense that races that fit so well into the Mother Nature, Father Science trope would even match the trope's gender implications: elves are feminine because nature is feminine, and all dwarves masculine because technology is masculine. This dichotomy also helps the both of them contrast against the mundane humans, who fit quite neatly between the two on all of these spectrums, including gender expression.

This is a Sub-Trope of Alien Gender Confusion.