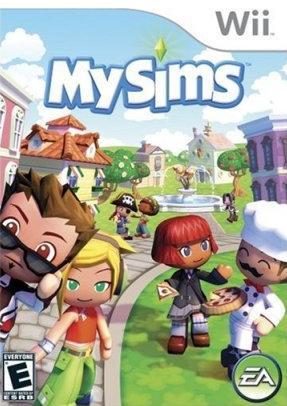 Released for the Nintendo Wii in 2007 (shortly followed by a PC version), MySims is a Spinoff of The Sims that takes a drastic departure from the usual series: Everything is extremely cute and you can't kill Sims anymore. The game is bright, cheerful, and rather Animesque. Instead of managing the life of a wide variety of Sims, you create a single character and take care of the whole town. You decide who gets to move into the town, you build their house for them, and you even build furniture. The Sims that you can move in fall into two categories: normal citizens ("townies") and Sims with businesses ("Com Sims"). The former are there to add a bit of color to the town, while the latter will give you several missions where you must build them specific pieces of furniture using "Essences" that make the item appeal to a certain type of Sim.

The six interests are Cute, Fun, Geeky, Spooky, Studious, and Tasty, and every Sims has a favorite interest, a second-favorite, and one interest they despise.