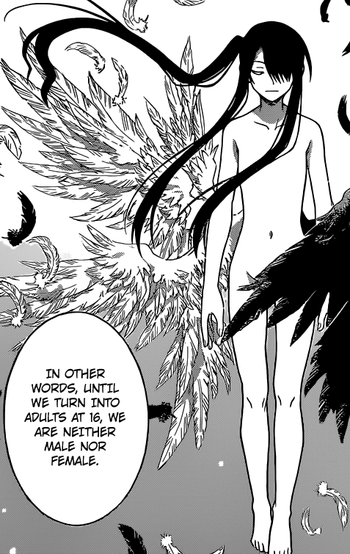 "I am an immortal entity with a large cue ball for a head, and no biological means of reproduction."
— Doc Scratch, Homestuck
Advertisement:

Whenever any characters have no genitals or secondary sex characteristics. They may identify as masculine or feminine, or they may have an entirely different gender identity. This is frequently a trait of spirits and spiritual beings, who don't have physical bodies in the first place. Note that due to a lack of alternate phrases in the English language, referring to characters as "sexless" does not mean that they're Asexual, which instead deals with sexual orientation and attraction, nor does it mean that a character does not or cannot have sex.note No, we're not renaming this trope again. If Everybody Wants the Hermaphrodite is in effect, they may, in fact, have a very active sex life.

Oddly, this trope seems to rarely apply to robots and Mechanical Lifeforms, who have bodies and personality chips designed around either male or female parameters even though, by definition, these beings have no biological sex. However, this can be chalked up to people wanting to avoid the Uncanny Valley when designing artificial intelligences.

Finally, Intersex people have sexual characteristics, but they may be ambiguous

or mixed, not fitting into either sex category. Characters like this sometimes run into Pronoun Trouble if they don't identify with a specific gender (this is because options such as "zhe", "hir", and singular "they" only came into wide usage in recent times after pressure from gender rights groups).

Sometimes a trait of a One-Gender Race. Not to be mistaken for G-Rated Sex, but can overlap. Often overlaps with Otherworldly and Sexually Ambiguous when a character is explicitly supernatural and this trait is used to emphasize it. Compare Ambiguous Gender, when the character does have a physical sex but the viewers/readers simply don't know what it is, and Barbie Doll Anatomy, when the body parts in question are presumably meant to be there but are not drawn for censorship reasons. Not to be confused with Purely Aesthetic Gender, when the gender of a video game character is completely irrelevant to the plot and or gameplay. See also Bizarre Alien Sexes and Non-Humans Lack Attributes.