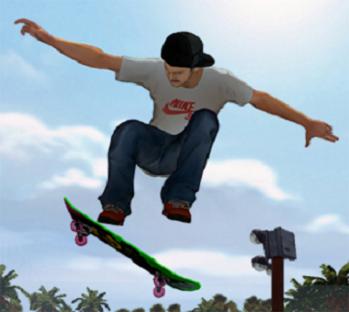 Sweet air, dude.
"oh ever notice how if a cartoon guy has a skateboard the wheels will NEVER be on the ground EVER."
— Dave Strider in this

For whatever reason, in promotional art/stock art/what-have-you, anyone depicted on a vehicle is depicted in mid-air, perhaps catching some radically awesome air if they're meant to be "cool".

Note that cars are generally an exception to this rule, unless the image is for an action series.

This follows simple logic — a picture of someone on a skateboard would be realistic but boring, right? You have to capture the attention of those looking with edgy poses! Nothing sells a stunt sports game like a shot of someone in midair.