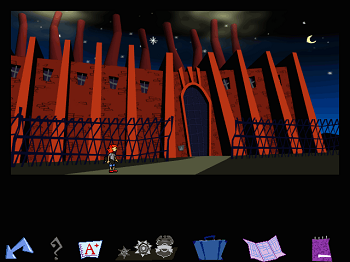 Saving Hooverville, one factory at a time.
A game in the JumpStart Edutainment Game series for fifth-graders, naturally enough. What starts out as a normal field trip for the titular Jo Hammet turns into a race against time to save the fair city of Hooverville. The Mad Scientist Dr. X has planted bombs all around Hooverville's industrial district as revenge for them cutting off his research funding, and it's up to Jo to find and disarm the bombs before they go off, crippling Hooverville's economy.

In order for Jo to reach the bombs at all, she needs to gather three particular items from certain places around town, provided you do an activity first. Help Bernie mix up some drinks at the Squishy Juice Bar, collect some artifacts in Hooverville's mines for Maggie Mead, and assist Jimmy the Shadow in reorganizing some trash at the city dump, all while trying not to get caught by Dr. X's goons.