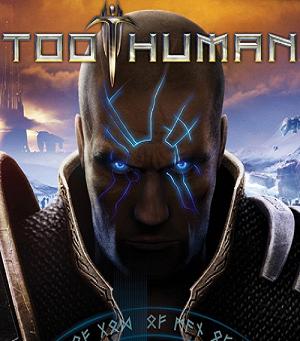 Frey: The end is coming, Heimdall.
Heimdall: Then let it come! We shall meet it with weapons in hand and joy in our hearts! Our lives belong to ODIN!
Advertisement:

Too Human was supposed to be the first game in a planned trilogy developed by Silicon Knights (Eternal Darkness, Blood Omen: Legacy of Kain). Originally planned as a four-disc PlayStation epic, it shifted consoles to the Nintendo 64 when an exclusive partnership was formed between Silicon Knights and Nintendo. That didn't happen either, and plans to release it for GameCube were similarly set aside when the development house began work on Eternal Darkness. After nearly a decade stuck in Development Hell, the game was finally released on Xbox 360 in 2008 to largely mediocre reviews and sales.

The plot is a science-fiction take on Norse Mythology, with its characters and events forming the basis for human gods, monsters and legends. The Æsir Corporation and its cybernetically enhanced rulers stand watch over what little remains of humanity during the last days of an ongoing war against sentient machines whose motivations are left unclear at best. Baldur — seen by the humans as less distant and aloof than his fellow "gods" — leads a hunt for a particularly nasty robot, GRNDL-1, and is drawn into a larger plot tied to the mystery of his wife's death.

Planned to be a trilogy and ending with many plot points unresolved, its poor reception in addition to Silicon Knights falling into bankruptcy has killed off any chance for a sequel. To make things worse, after Silicon Knights was found to have copied code from Unreal Engine 3, a court ordered all copies of the game destroyed and the game purged from all online stores. Nevertheless, in June 2019, Too Human surprisingly became one of the last Xbox 360 titles made backwards compatible for the Xbox One, being re-released on the Xbox Games Store for free.

Too Human provides examples of: