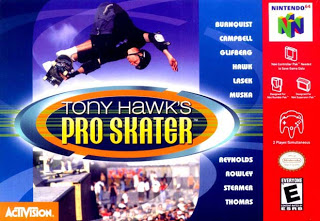 So here I am, doing everything I can...
Advertisement:

The Tony Hawk series is a line of skateboarding video games published by Activision, and one of the first to feature the likenesses of professional skaters such as the Hawkman himself.

The first three games in the series gave the player a two-minute time limit to score as many points as possible by stringing together grabs, flip tricks, and grinds. Scoring enough points and completing enough objectives (such as grinding a particular rail or jumping over a specified gap) will unlock a new course for the player to skate on. Many of the skate parks in the series are modeled after real locations, such as New York City, Los Angeles, and Philadelphia. Beginning with Pro Skater 4, the levels were expanded greatly, and the two-minute timer was eliminated (except for particular challenges). While the Pro Skater games are examples of No Plot? No Problem!, the post-Underground games would generally come with an actual plot, often of surprisingly good quality.

The tight, fast-paced gameplay, superb level design, mountains of hidden unlockables and Easter Eggs, addictive multiplayer (Notably, Pro Skater 3 was the first PS2 game to feature online functionality, before the official system modem was even released) and impeccable taste in licensed music led to absolutely enormous financial and critical success - with Pro Skater 2 in particular being the second highest rated game of all time on Metacritic, tied with Grand Theft Auto IV and Soulcalibur and just behind The Legend of Zelda: Ocarina of Time.

Unfortunately, the series ran on a gruelling (for both the developers at Neversoft and the players) annualised schedule, a move which, unsurprisingly, led to stagnation and franchise fatigue. Depending on who you ask, the series peaked with Pro Skater 2, Pro Skater 3, or Underground, with the franchise generally agreed to have then circled the drain until Neversoft stopped making Tony Hawk games after the commercial failure of Proving Ground, and promptly began working on Guitar Hero. They were merged into Infinity Ward in 2013.

On September 4, 2020, Activision released a Video Game Remake of the first two Pro Skater games.note While marketed as a "remaster", the game is remade from the ground up with all new assets and code. The remake was developed by Vicarious Visions, who also previously worked on the Crash Bandicoot N. Sane Trilogy, and have experience with the Tony Hawk games, having done most of the series' ports for Nintendo handheldsnote the Game Boy Advance ports of all games from 2 to Underground 2, American Sk8land and the DS ports of Downhill Jam and Proving Ground.