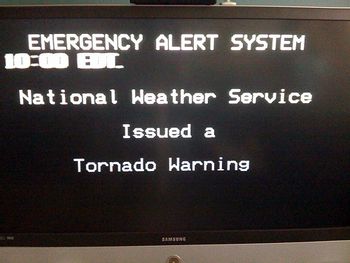 This Is Not a Drill
Advertisement:

The answer to the question, "Hell is that noise?"

The Emergency Broadcast is a means of public warning and public annoyance alike. Hearing an Emergency Broadcast warning of actual danger may lead to Oh, Crap!, Mass "Oh, Crap!", the need for one's brown pants to be brought — in that way, it may be the ultimate Brown Note. On the other hand, a test or a warning of something that doesn't affect you (e.g. a missing child warning, a flood when you're on high ground, a tsunami when you're 100 miles inland) may be a Berserk Button and lead to frustration with Crying Wolf. Another frequent frustration is when an actual alert has such horrible sound quality you can't understand what's being said. In many countries, Atomic Hate was the primary reason for the system's creation, and it eventually (and thankfully) ended up never being used for that purpose (yet, anyway) and being used for many others. May involve an Emergency Presidential Address. In some occasions, both in fiction and real life, an emergency broadcast might outright preempt a program.

Obviously a major source of Nightmare Fuel. Needless to say, Truth in Television. See also We Are Experiencing Technical Difficulties.

open/close all folders
Emergency Broadcast systems by country
Comic Books
Fan Works
Advertisement:
Film
Literature
Live-Action TV
Music and Sound Effects
New Media
Radio
Recorded Comedy
Stand-Up Comedy
Theme Parks
Video Games
Web Video
Western Animation
"This concludes this test of the Emergency Broadcast System. If this had been an actual emergency, you would have been advised to crawl under a desk or table, grab your ankles, put your head between your knees, and kiss your ass goodbye."
Feedback

Things aren't looking too good down under...

Things aren't looking too good down under...