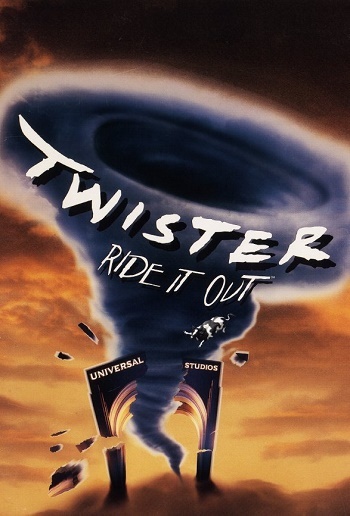 Helen Hunt: At a certain point, you can't tell the difference between the movie... and reality.
Bill Paxton: You start believing the twister is not just a weather condition. It takes on a life of its own, becoming an entity. A demon spirit, a devouring colossus bent on destruction. By the end, there's only one thing you can do — hold on for your life.
Advertisement:

Twister...Ride it Out was a special effects simulation attraction at Universal Studios Florida. Based off of the film, Twister, the attraction recreated certain highlights from the picture.

The attraction also took a behind-the-scenes look of the film, as the film's two stars, Bill Paxton and Helen Hunt, would discuss on screen what they had gone through when making the picture, mentioning the incredible amount of special effects-work that was put into the movie and just how close they got to a real tornado. They would also discuss tornadoes themselves, describing them as terrifying yet beautiful forces of nature that should never be underestimated.

This would all culminate in the attraction's finale, where guests would get put right in the middle of the scene in the film where a Drive-In theater is terrorized by a tornado; also mixing in other elements from the film such as the flying cow and the "Dorothy" device.

After the park-original attraction, Ghostbusters Spooktacular, closed in November 1996, it would not be until 1997 that Twister was announced as its replacement. While designing the attraction, Universal Creative, consulted real meteorologists to get a decent idea on how the experience in the attraction should look and feel.

Initially slated to open in March 1998, it was delayed due to a series of tornadoes in Central Florida killing many people that same monthinvoked. It would finally open two months later on May 4, 1998.

After a 17-year run, the attraction was closed on November 2, 2015. It was replaced by Race Through New York Starring Jimmy Fallon, which opened in 2017.

Tropes used in Twister...Ride it Out include: