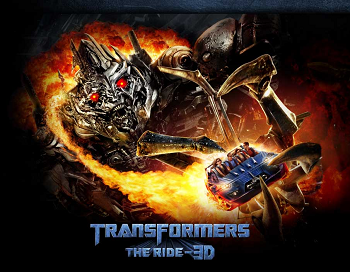 "The future of both our species will be decided by what happens with you. Protect the AllSpark. Protect each other."
— Optimus Prime
Advertisement:

Transformers: The Ride is a 3D dark ride/simulator hybrid attraction that can be found at the Universal Studios theme parks in Singapore, Hollywood, Florida and Beijing.

Based directly off of the Transformers films, the ride involves guests becoming the latest recruits at NEST. Their "training" is put on halt when Megatron & the Decepticons launch another full-scale attack on earth, intent on retrieving the last remaining shard of the Allspark. With the military facility now compromised, guests are ordered to ride with the newest Autobot, Evac, and evacuate the shard from the city. Things of course don't go as planned and the riders are thrust into a city-wide battle between the Autobots and Decepticons.

Tropes shown in Transformers: The Ride include:

"Your bravery has saved the planet. Well done, freedom fighters."