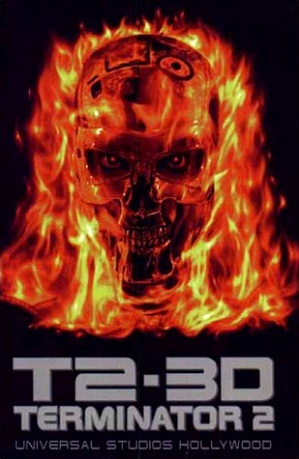 John: (looking at a robotic skull the Terminator is holding in his hand) Friend of yours?
Terminator: He was my college roommate.
Advertisement:

Terminator 2 3-D: Battle Across Time (also known as T2-3D) is a theme park 3-D feature shown at Universal Studios Theme Parks. While the Japanese location is still operational, the American locations formerly in Hollywood and Orlando have closed permanently to make room for new attractions.

The ride is a quasi-sequel to Terminator 2: Judgment Day, and has participants take part in a demonstration of the T-70 Terminators by Cyberdyne Systems. During an opening presentation where Cyberdyne showcases its technological advancements in a product video, the feed is interrupted by Sarah and John Connor, who tell the assembled guests to get out of the building immediately before they attack. The company representative, Kimberley Duncan, quickly excuses the hacked feed as part of the act and the demonstration continues.

Midway through the demonstration, Sarah and John storm the stage and take the rep hostage, only to be surprised when a nearby portal opens and the T-1000 walks out. Just when it looks like they'll be killed, a second portal opens and the familiar T-800 (Arnold Schwarzenegger) arrives to rescue them. What follows is a chase sequence where the T-800 and John are pursued through the time portal into the future by the T-1000, and work to destroy Skynet once and for all by infiltrating the AI's central hub and blowing up its main power source.

The ride was directed by James Cameron, who returned to helm the production (with a $24 million-dollar budget) along with original actors Schwarzenegger, Linda Hamilton, Robert Patrick and Edward Furlong. The Hollywood version of the attraction ran from 1999 until 2012, when it was replaced by Despicable Me: Minion Mayhem, and after operating for 21 years, the attraction's original incarnation in Florida closed on October 8, 2017 and was replaced by The Bourne Stuntacular on June 30th, 2020. It still continues to operate regularly at Universal Studios Japan (where it opened in 2001).

Not to be confused with the 2017 3-D rerelease of Terminator 2: Judgment Day.

Tropes used in the ride include: