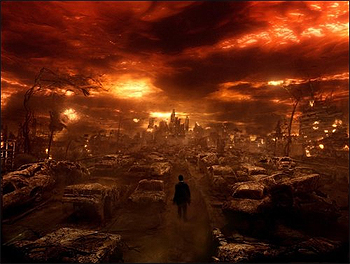 You don't walk in... you merrily skip and prance like an elf of spring!
"One does not simply walk into Mordor."
— Boromir, The Fellowship of the Ring (The Film of the Book)
Advertisement:

The Evil Land or Supervillain Lair or Hidden Elf Village will be impossible for the heroes to get into except on foot (or some other similarly inconvenient method), due to impossibly high mountains that have no passes and no goat-trails, a completely militarized frontier, mist-like magical barriers, cyclopean battlements, stormy reefs, and gigantic Black Gates. Both the good guys and the bad guys will maintain this policy because of these natural and man made defenses. As a result, The Protagonist cannot simply hop a wagon train or fake a passport; they must climb impossibly sheer cliffs, traverse enormous deserts, and, because of the sheer visitor-unfriendliness of these places:

The rulers of these places are often well-provisioned. Asking 'how' could lead to Fridge Logic (although, for the case of the Trope Namer, see below). The incredulous hero, having crawled over thousands of miles of impassible terrain to get there, would have fairly expected to find an outpost on the verge of starvation. Instead, the isolated center of the stronghold turns out to be the most lavishly appointed place in the entire country, despite the land's hostility and the dangerous locals making few people want to go there.

Corollary: security is always more and more lax the further you go into the forbidden realm... to the point where one can sneak into the lavishly appointed ballroom and mooch food off the ruler's table.

Cue an improbable conversation with the Benevolent Ruler, who may even have a glass of wine and explain that the hero was always expected to get this far. Instead of shipping him back to a prison cell safely located on the outskirts, the hero will be deemed more useful alive, or he will be held in a poorly guarded jail cell to await sentencing.

The seasoned marksmen who swarm the hills are always much more likely to capture our heroes if they attempt to avoid bushwhack away from the enemy camp, whereas the ones back on base are too busy drinking to notice heroes walking past the main gate or possibly scaling the battlements. All ways in are guarded, so naturally the hero will try the one that seems most suicidal.

Pedestrian access may not be necessary, if more grueling methods of transportation are available: Access might be limited to slingshot, climbing with daggers, or motocross. Alternate routes may be blocked off by insurmountable obstacles.

Contrast with River of Insanity, a.k.a. Doomed Expedition, which is the opposite sort of journey: wherein the voyage may be dramatic and increasingly perilous, but is also the most pragmatic means of getting there (you don't make it). See also Border Crossing. Compare the more benevolent Yellow Brick Road, where you have just as few options but not as many things trying to kill you on the way.