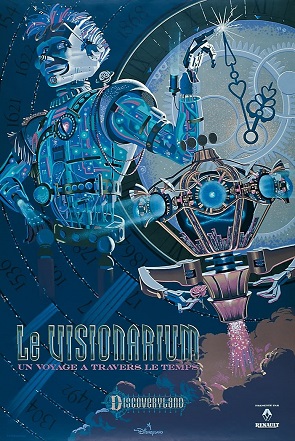 A journey through time!
Advertisement:

The Timekeeper, also known as From Time to Time or Le Visionarium, was a CircleVision 360 Film attraction produced for the Disney Theme Parks in 1992, shown at Disneyland Paris, Walt Disney World's Magic Kingdom and Tokyo Disneyland. The attraction takes the form of a demonstration of a time machine created by mad robot scientist The Timekeeper (Robin Williams). To share time travel with a wider audience, the Timekeeper also designed a flying camera robot named Nine-Eye (Rhea Perlman), so named for her 9 cameras that provide a 360 degree experience.

9-Eye is sent through time by The Timekeeper, so that she can send back the surrounding images as she records them in whichever era she ends up finding herself in. When sending Nine-Eye to the Exposition Universelle in 1889 in Paris to see Jules Verne (Michel Piccoli) and H. G. Wells (Jeremy Irons). When Verne scoffs at Wells' ideas of time-travel, he encounters 9-Eye and ends up hitching a ride into the modern world.

The Timekeeper provides examples of the following tropes: