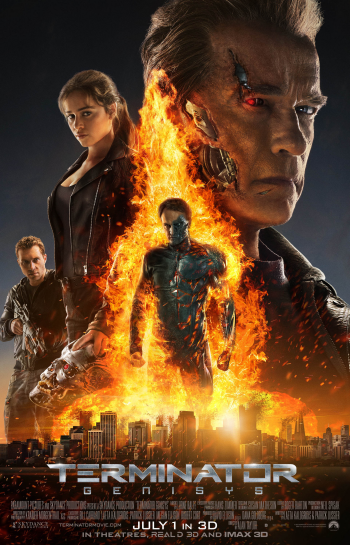 In 2029, humanity has finally won the war against SkyNet, an Artificial Intelligence defense network that became self-aware and attempted to Kill All Humans via tactical nuclear strikes; the day of its initial attack—the 29th of August, 1997—became known as Judgment Day. The victory becomes short-lived when John Connor, leader of the human resistance, learns that SkyNet has sent a T-800 Terminator back in time to eliminate John's mother, Sarah, and prevent his birth. Fellow resistance fighter Kyle Reese volunteers to travel into the past and protect her. He is sent back to 1984...

...where Sarah has already survived a future assassination attempt in her past, thanks to a reprogrammed T-800 that has since raised her; the two of them have also taken care of the T-800 that Kyle was meant to fight. But SkyNet has also sent more advanced Terminators back to the past, which means Kyle, Sarah, and the new T-800 must fight for their lives while trying to prevent Judgment Day from ever happening...and figuring out what the hell else has changed about the timeline.

Arnold Schwarzenegger returns as the T-800(s); he stars alongside Jai Courtney (Reese), Emilia Clarke (Sarah Connor), Jason Clarke (John Connor), Lee Byung-hun, J. K. Simmons, and Matt Smith (making this the closest we may ever get to seeing the Doctor working with the T-800).

Genisys was meant to be the first part of a new trilogy, but in January 2016, Paramount pulled the next two films off its release schedule

, in light of disappointing returns and mediocre reviews, and Emilia Clarke declined to appear in any future movies. A sixth film, Terminator: Dark Fate, eventually unrebooted the series as an official sequel to Terminator 2: Judgment Day.

This was actually not the first involvement of Paramount in the franchise. Since 1999, they have held the American television rights to Judgement Day, a result of Viacom acquiring Spelling Entertainment Group, owner of the previous distributor Worldvision Enterprises (which held the US TV rights to much of the library of Carolco Pictures, the main production company of Judgement Day), that year.