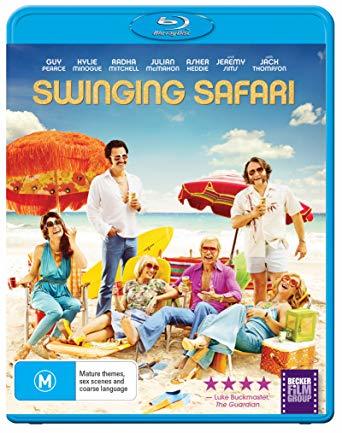 Swinging Safari: is a Comedy Drama from Australia, released in 2018. It was written and directed by Stephen Elliot, best known for The Adventures of Priscilla, Queen of the Desert.

Australia, 1975. The beach suburb of Nobbys Beach is a place that revolves around surf mats, baby oil, boxed wine and the new miracle of Kentucky Fried Chicken. 14 year-old Jeff tries to find his feet in a world changing faster than his hormones, and deal with his crush on shy and sensitive girl-next-door Melly. When the beach town suddenly hits the spotlight after the body of a 200-ton whale is washed ashore, Jeff and Melly think it's the biggest thing that ever happened in their lives. Meanwhile, their eccentric parents are catching up with the sexual revolution that has also washed up on Australia's beaches. And just like the decaying whale, it's all about to go spectacularly wrong.