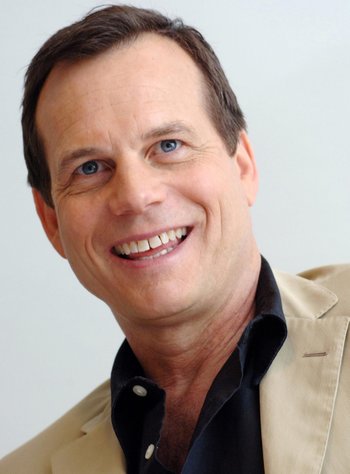 William Archibald Paxton (May 17, 1955 – February 25, 2017) was an American actor and film director born in Fort Worth, Texas. He gained popularity after starring in a number of films, including Apollo 13, Weird Science, Twister, Aliens, True Lies, and Titanic (1997). Paxton starred in the HBO series Big Love (2006–11) and was nominated for an Emmy Award for the miniseries Hatfields & McCoys.

Paxton could be considered a cult actor, a character actor, and a movie star. He mantained a consistent presence in film and television throughout his career and could always be relied on to give 100%. He was a regular collaborator of James Cameron, appearing in four of Cameron's films.

He's also the only actor to play characters that have been killed onscreen by a Predator, a Terminator, and a Xenomorph. (Lance Henriksen almost counts, as his character was Killed Offscreen in The Terminator).

Paxton died of complications from heart surgery at age 61 on February 25, 2017. He is survived by his wife Louise Newbury and their kids James and Lydia.

His son James Paxton is also an actor.

Tropes associated with his work