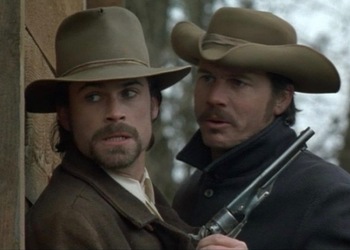 After the American Civil War, brothers Frank and Jesse James, along with Cole, Bob and Jim Younger and Archie Clement will create a gang to help their war ravaged home, stop the railroad and do battle against the Pinkertons. To some they were heroes, while to others nothing but cold-blooded murderers.

Frank and Jesse provides examples of: