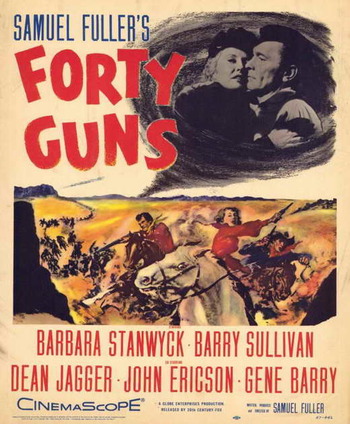 The three Bonnell brothers are federal marshals. They arrive in Tombstone, Arizona, looking for an outlaw who has robbed the mail. They soon have to confront Jessica Drummond (Stanwyck), a hard-edged female rancher who makes the law around town with her forty hired guns at her side. She agrees to deliver the outlaw, one of the forty guns, to Griff Bonnell (Sullivan), but Jessica's goonish younger brother Brockie wants to declare war on the brothers.

Tropes used in Forty Guns include: