Film / For Your Consideration 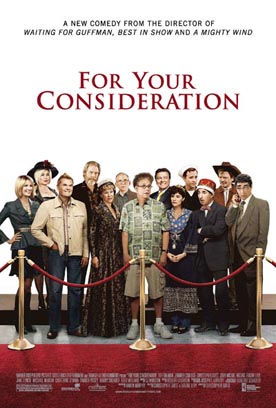 For Your Consideration is a 2006 comedy film directed by Christopher Guest. It was co-written by Guest and Eugene Levy, both also starring in the film.

The plot follows Marilyn Hack (Catherine O'Hara), a 30-year-veteran of Hollywood who has yet to catch a break. She is able to land the lead role in Home For Purim, playing the dying matriarch of a Southern Jewish family in the 1940s. Also joining her are Victor Allen Miller (Harry Shearer), a former stage actor who has been reduced to doing commercial voice-overs, playing her husband; Callie Webb (Parker Posey) an off-Broadway comedienne, playing her recently out daughter; and newcomer Brian Chubb (Christopher Moynihan) as her son, home from the Navy.

Despite a highly eccentric and demanding director (Guest) and a producer (Jennifer Coolidge) whose only contribution is that she can write checks, awards buzz begins to surround the movie, with Marilyn and Callie's names being considered for Best Actress, while Victor is supposedly being considered for Best Actor. All three soon begin to develop egos, and take great pride in knowing that they will soon be Academy Award nominees. When the nominations are formally announced, however, only Brian, who has received next to no attention, has been nominated for an award, for Best Supporting Actor. The other three quietly return to their mundane careers.

Tropes associated with the work: