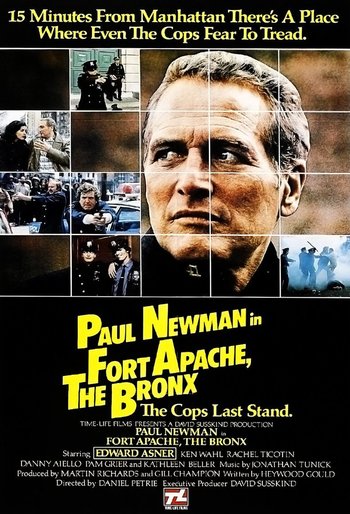 Dugan: They put it out you volunteered for this job.
Connolly: They did.
Dugan: I'll tell you somethin', Connolly. You'll do better walkin' the beat in Beirut than you will here.
Advertisement:

Fort Apache, The Bronx is a 1981 crime drama film directed by Daniel Petrie, about the NYPD's 41st Precinct in the South Bronx. The station was given its name after the John Wayne film due to being a safe outpost in hostile territory. The film takes place, and was made, during the infamous "The Bronx is Burning" era when crime was out of control, anybody with even a little bit of money was fleeing, and buildings were being burned down at a rate of dozens a day. It's inspired by the experiences of two real life officers from the Precinct, Thomas Mulhearn and Peter Tessitore, who patrolled the neighborhood during these very dark days of 1964-1968.

Paul Newman plays Murphy, a self-admitted stereotypical third-generation Irish American cop who's seen it all and understands what he's doing. Ken Wahl plays his young partner Corelli, who actually defies the young stud trope and also knows what he's up against due to having lived in the neighborhood all his life. Edward Asner plays Connelly, the newly-assigned captain of the precinct.

The film generated some controversy due to being perceived as racist since virtually every villain in the movie is black or (Mestizo) Hispanic. However, this is addressed during the prologue and the film emphasizes that the city's NYPD was at the time served almost entirely by white male officers and that very few spoke Spanish despite the 41st Precinct being in a heavily Spanish-speaking neighborhood.