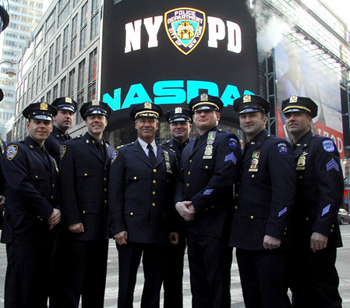 New York City's Finest are, in reality, plenty competent, with a few exceptions. In fiction, however, the NYPD are usually portrayed as gritty dudes more than willing to bend a few rules to get what they want, not particularly interested in the particulars.

This is rooted in some historical truth. Throughout the 19th century, parts of New York City (most famously the Five Points neighborhood in the Bowery) were damn near lawless. To contend with the territorial packs of criminality, the NYPD (modern policing was still a new idea, believe it or not) learned to function as, in essence, a very organized street gang. But, you know, for justice. Cops began to stake out turf, walking around in groups of three or more, and generally being as intimidating as possible. These practices are now common with law enforcement in every major American city. Nonetheless, broad swaths of New York City remained unpoliceable well into the 1980s.

Until recently, New York City had a number of separate police agencies. Transit Police, Library Police, even the Sanitation Department had their own Garbage Police! These have all been merged into (or back into, in the case of the Transit Police, who originally were part of the NYPD until about 1948) the NYPD.

Another major leap in this trend of localization began in 1994, under Mayor Giuliani. His plan granted more power to individual precincts to make localized decisions, harsh punishment for relatively minor infractions like public urination and graffiti tagging, and what some have claimed amounts to de facto racial profiling. These and other less political factors contributed to a significant drop in criminal activity and, more recently, to the lowest violent crime rate of any major city in the United States. It also led to an increase in allegations of civil rights abuses and misconduct.

Since September 11th (when the NYPD lost 23 officers), extra equipment has been added to the patrol officer's belt, including a gas mask. Even reality-intensive portrayals of the NYPD may neglect this detail, as it looks completely ridiculous and clumsy — and as told by many cops forced to wear the stuff, it is. In addition, the NYPD now occasionally posts paramilitary troops (complete with body armor and assault rifles) outside major shopping locations, subway and rail stations, and other potential terrorist targets. They also have had undercover officers sent along with the FBI and CIA, thanks to one of the chiefs being ex-CIA and interested in counter-terrorism.

The NYPD turns up a lot in fiction set in New York City, to the point that the NYPD has its own dedicated Film Division just to assist in live action works, so we'll just limit ourselves to stuff where they are the stars. Expect many of these to be set in the "12th Precinct", which if it really existed would place the show in Lower Manhattan.