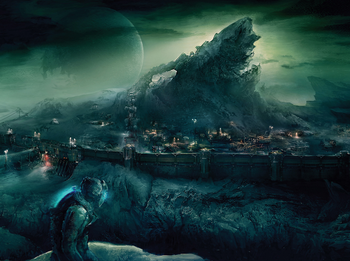 "Welcome to Tau Volantis!" Haha! But seriously, where's the beaches on the brochure?
LTJG. Dr. Julian Bashir: This'll be perfect. Real frontier medicine.
Maj. Kira Nerys: "Frontier medicine"?
Bashir: Major, I had my choice of any job in the fleet. ... I didn't want some cushy job or a research grant. I wanted this. The farthest reaches of the galaxy. One of the most remote outposts available. This is where the adventure is. This is where heroes are made. Right here, in the wilderness.
Kira: This "wilderness" is my home.
Bashir: Well, I, I, I didn't mean—
Kira: (sarcastically) The Cardassians left behind a lot of injured people, Doctor. You can make yourself useful by bringing your Federation medicine to the natives. Oh, you'll find them a friendly, simple folk.
— "Emissary", Star Trek: Deep Space Nine
Advertisement:

This is the place you will be sent when you are Reassigned to Antarctica. It is a lonely place in a bleak wilderness at the edge of the Vestigial Empire, under-resourced and often just as lacking in staff. You and your fellows are a Garrison Of Thieves And Whores but you are all that stands against the ravages of the Barbarian Tribe on the other side of the border.

Related to Citadel City. The main difference is that it is more obscure, and is usually a military or similar station rather than being a whole city. Typical of a Western. In Space Opera it might be a whole planet. Compare Eerie Arctic Research Station, a civilian equivalent.