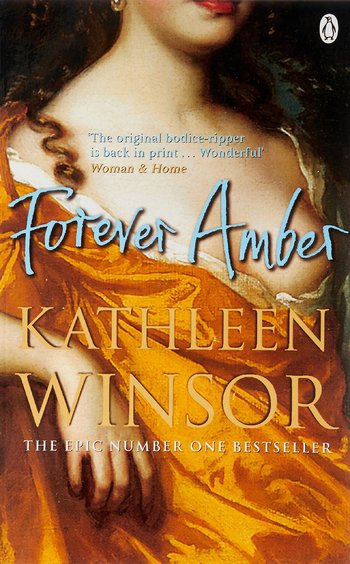 The novel tells the story of orphaned Amber St. Clare, who makes her way up through the ranks of 17th century English society by sleeping with and/or marrying successively richer and more important men, while keeping her love for the one man she can never have. The subplot of the novel follows Charles II of England as he returns from exile and adjusts to ruling England. The novel includes portrayals of Restoration fashion, including the introduction and popularization of tea in English coffeehouses and the homes of the fashionably rich; politics; and public disasters, including the plague and the Great Fire of London. Many notable historical figures appear in the book including Charles II of England, members of his court, and several of his mistresses including Nell Gwyn.

Winsor's inspiration for the book came from her first husband who had done his undergraduate thesis on Charles II of England. For five years while he was serving in the army she read books on the period and wrote numerous drafts of what would become Forever Amber.

The book was condemned by the Catholic Church for indecency, which helped to make it popular. One critic went so far as to number each of the passages to which he objected. The film was finally completed after substantial changes to the script were made, toning down some of the book's most objectionable passages in order to appease Catholic media critics. Fourteen US states also banned the book as pornography, but despite this, Forever Amber was the best-selling US novel of the 1940s. It sold over 100,000 copies in its first week of release, and went on to sell over three million copies. It was also responsible for popularizing "Amber" as a given name for girls in the 20th century.

Adapted into a film in 1947 by 20th Century Fox, directed by Otto Preminger and starring Linda Darnell in the title role, with a supporting cast including Cornel Wilde, Richard Greene, George Sanders, Glenn Langan, and Jessica Tandy. The film was also a big success, earning the biggest opening-week box office totals of any film released up to that point in time.