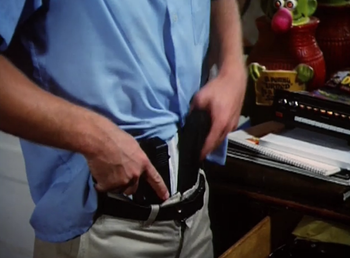 "You'll shoot your nuts off, kid!"
Mitch Henessey [singing]: Putting the keys in my left pocket. Hmm hmm hmm hmm hmm. Gun in the right-hand side.
Samantha Caine: It makes a bulge, people can see.
Mitch: Ya want me to stick it in my pants and shoot my damn dick off?
Sam: Now you're a sharpshooter?
— The Long Kiss Goodnight
Advertisement:

When a character stores or conceals a weapon, typically a gun, in a place which is not suited for such a purpose, typically the waistband or sometimes pants pocket. There, or loose in a civilian briefcase. Anywhere but a holster. Often as not, the safety isn't on and the gun is loaded, too. Perhaps it's another source of the term "going off half-cocked".

Although aversions aren't uncommon, the weapons rarely fall down the pants leg (provided you are wearing a belt or pants at least as sturdy as blue jeans), and only occasionally will the weapon accidentally discharge and injure someone in an intimate place. As of the 1950s the actions of firearms sold to civilians are required to be "drop-safe", so the not going off part is Truth in Television. Even when the weapon is drawn suddenly, like for combat, and leaves the pants with the user's finger on the trigger, it typically only happens for comedic purposes. Because what's funnier than someone shooting themselves in the foot? That's right.