Film / Look Who's Back 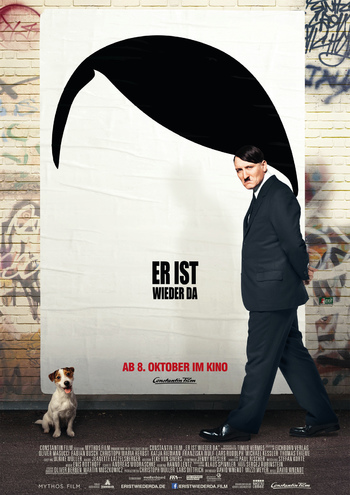 Look Who's Back (German title: Er ist wieder da, literal translation: He's Back) is a 2015 German film, directed by David Wnendt. It is the screen adaptation of the book Er Ist Wieder Da.

Oliver Masucci plays Adolf Hitler, who somehow resurrected or time-travelled in 2014. He's a Fish out of Temporal Water in a Germany he no longer recognizes at first, but quickly realizes that he can go back in the political business thanks to modern technologies and many people being as gullible as ever.

The film is, depending on how you view it, a more manic and dire interpretation of the book or how the events in the novel actually happened. Compare it against Borat, which also features a striking satirical character making commentary in the form of unscripted interviews with men on the street segmented against a structured plot.

It got an Italian remake in 2018 with Luca Miniero's Sono tornato (meaning "I'm back"). It features Benito Mussolini suddenly appearing in Rome instead of Hitler in Berlin, but other than that it's a straight adaptation. Including the reactions of non-actors at the end.